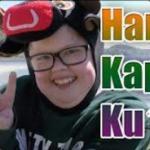 By Shaky, March 7 in Report a Player